I have a birthday conundrum. I love to celebrate the lives of my sweet trio, but three kids sharing the same special day with not only different genders, but assorted interests is challenging. Add to the mix that it always falls on Memorial Day weekend during the last week of school and hosting a party gets a bit complicated. Have I mentioned that I am not crafty?

This year we opted to simply host the Second Grade year-end party and serve cake at the end. Scheduling was easier, attendance was awesome and we were able to find a fairly gender neutral theme: a messy party.

I had seen various things around the Internet with ideas of how to pull this off which combined with decades of Young Life and other youth ministry exposure resulted in SO MUCH fun. After receiving a few questions about the process/planning, I've document the process here in case it helps anyone else considering this. There are so many games, this really just scratches the surface, but we chose the following 10 and it took 32 kids about an hour to get through them.

When the children arrived, fun music was playing and my friend Trey (who agreed to be Mr. Red, our emcee and enthusiastic game leader) greeted everyone. White t-shirts were given to each child as their party favor. This is completely optional, of course, but it really illustrated the degree of messiness to start with a white background. After washing them the stains faded, but are still present as a badge of honor of sorts. Sending these to attendees ahead of time as part of the invitation might work well. Ours were put on over the shirts the children wore to the party.

Another tip regarding shirt sizing is that I ordered half youth medium and half youth large. The first party activity was having the kids line up shortest to tallest. We simply walked down the line, handing out Mediums until our supply was depleted, then switched to Large. It seemed to work!

During the t-shirt distribution each child was also given a number 1-4, which we wrote on their hand so they wouldn't forget. These numbers were used for the activities when we needed kids to quickly go to four corners for supplies. (This will make more sense later.) The entire process was under five minutes.

At this point, Mr. Red led everyone to the first station, the Before picture. 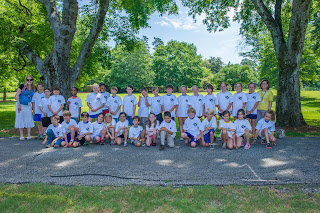 After a quick snapshot, the group was told to look at the number on their hands and then run to four corners of the yard to find adults with the correlating number. We used four dollar store buckets with the numbers 1-4 written on the side to mark these corners. Inside the buckets were small squirt guns (four for a dollar at the dollar store) containing purple colored water to increase the messiness factor. I considered using food coloring but didn't want to stain skin, so we used washable paint mixed with water. Different colors could be assigned to each corner, but for simplicity we just used one. It really was not set up as a contest--just an excuse to run, squirt and stain. 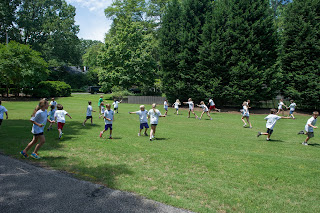 When the squirt guns were emptied (about 90 seconds later :-) Mr. Red called the kids to station #3. Three disposable pie pans were in place with Skittles (M&Ms or gummy bears work great too) buried under several cups of flour. Mr. Red asked for three volunteers who knelt on the ground before the pie tins with hands behind their back. They then had one minute to try to get as many Skittles out of the flour pan as they could using only their face/mouth.

Make sure to have someone ready with a hand towel and water to drink...plain flour does NOT taste very good. 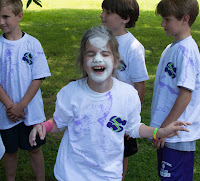 Station #4 involved six volunteers (three teams of two). Three kids had whipped cream applied to their faces and heads while three messy-averse volunteers were given a Ziploc full of cheese balls. Their task was to toss the cheese balls and try to get as many as possible to stick. 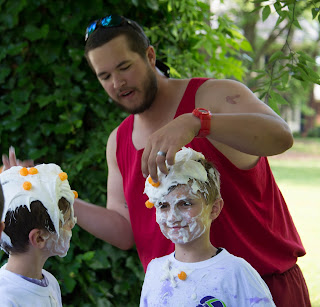 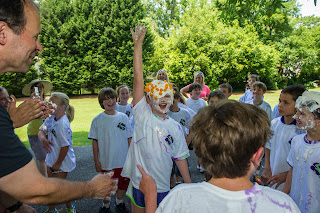 Station #5 was my personal favorite, twister with real (washable) paint in the circles. 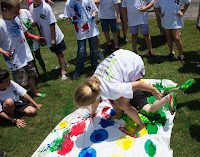 Although only two pairs actually played over half of the children wound up covered in paint...and so did the host.

Let's just say there was a lot of hugging going on once paint got involved. Although we used washable paint it DID stain. You have been warned.

From this activity, the kids were asked to run to their four corners again (remember the numbers on their hands?) where cups of jello were distributed. 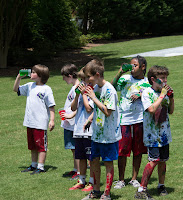 After a little taste testing, there was a 3-2-1 countdown and the bedlam/food fight began. 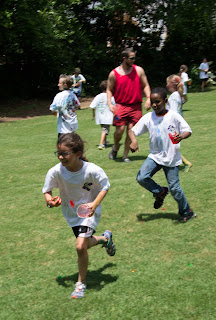 While the children were still in the grassy field we asked them to divide into two straight lines facing each other and handed out raw eggs. A good old fashioned egg toss ensued.

Our 8th activity was a wacky hair salon where three boys were chosen to style three girls' hair. Their only supplies were shaving cream and hotdogs. 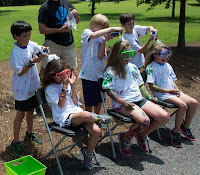 There was a certain brother who reveled in the opportunity to 'decorate' his sister.

After this activity we took a snack break. Sticky hands were rinsed with a water hose and a buffet of messy finger foods were served: watermelon, powdered doughnuts, Cheetos, Doritos. I am sure there are healthier alternatives, but we were all about the messiness. We recognized four of the Summer birthdays with small smash cakes (my nine year olds' idea). 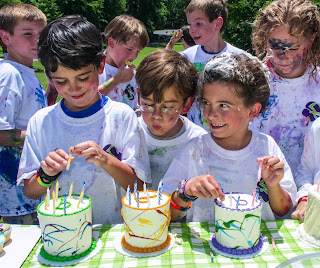 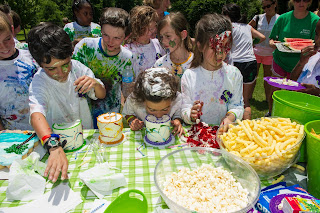 The group Summer birthday celebration followed...and it was clearly the favorite activity for the children: human ice cream sundaes. All of the kids with Summer birthdays sat back to back in a circle while they were transformed into a sticky treat. Children lined up and took turns covering the birthday kids with ice cream, chocolate and strawberry syrup, whipped cream, cherries, sprinkles and ice cream cones. 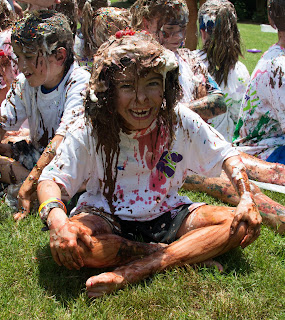 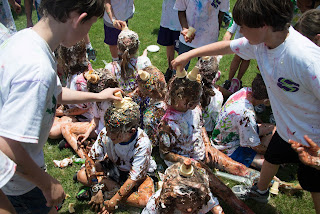 The grand finale was a spaghetti slip and slide. A tarp was covered in six large packages of boiled spaghetti noodles, cans of tomato sauce and a secret ingredient of shampoo to up the slipperiness. 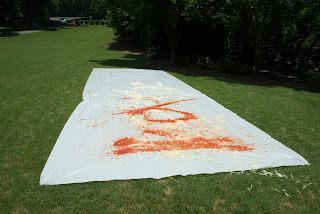 We didn't intend for it to be a group effort...but these kiddos could not wait! 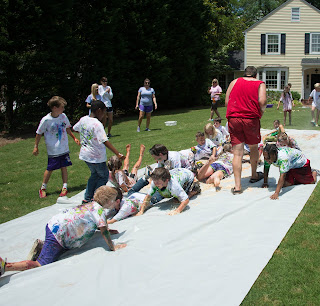 And then the "kid wash" began! I could not believe the various levels of messiness. It was very clear who enjoyed the opportunity to get filthy/sticky/wet and who did not--but it seemed that even the messy-averse enjoyed themselves. I think the key was to make the activities voluntary. One of my own (sensory) children managed to stay on the sidelines of most of the activities, but he told me afterwards it was 'the best ever.' 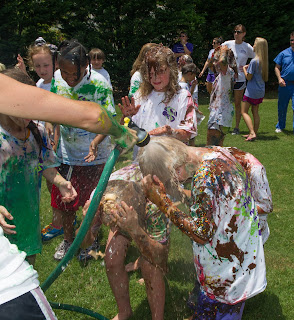 Lessons I learned:
1. WARN PARENTS to only let kids wear things that can be stained...even the 'washable paint' left its mark. (Chocolate syrup and cherry juice leave pesky stains too!)
2. Ask attendees to bring a change of clothes and an old towel too. We do not have a pool, so we used a water hose to wash everyone down after the festivities.
3. Have old towels on hand to wipe faces after some of the messier games and water available for kids that are bothered by sticky hands.
4. Have a place for folks to go to the bathroom--and possibly a volunteer to supervise messy kiddos coming in and out of your house. I found 'washable' paint smudges in a few random places :-)
5. Having 4-6 adults assigned to help you out is essential. We had the stations all set with supplies, but the four corners each need to be manned and a couple of extra hands are needed for cleaning up messy children after each game.

I would absolutely do this party again! Gathering the supplies, setting up and preparing the noodles, jello and water guns was time consuming but the payoff (these faces) made it completely worth it! 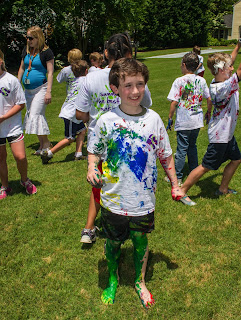 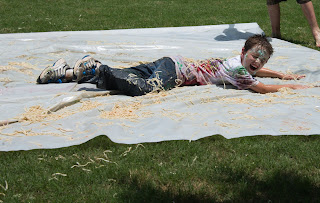 Looks like a blast - one that they will NEVER forget!

Would have been fun to see a group "after" picture before wash up. Happy birthday to your trio of fun!

AMAZING!!! What a great party!!! that is a great idea!!! Looks like sooo much fun and a party they will NEVER forget!!!

Magnificent Mama award goes to you!

We totally intended to take an 'after' but bedlam ensued once the slip and slide got going and it didn't happen... :-) big regret!

Love Being A Nonny said...

WOW...Young Life at it's finest! They will always remember the year they had this party!!!!

This seems like a fun party, but, with all due respect, I have to admit I'm surprised by the extraordinary waste of food. Your writing and outreach work seems to go against this kind of disregard. If I throw a party like this, I'll stick to washable paint!

I don't mean for this comment to be offensive at all, and I hope it doesn't come across that way. Perhaps you had a conversation with your children about this that you didn't include in the post. I've always read your blog and thought of you as someone who thinks deeply about others who have less. It's shocking to me that you'd throw a party that encourages children to literally play with large amounts of food that will later be thrown away.

Sammy, you make a good point about the food. I always appreciate the opportunity to think of things from a different perspective.

I honestly thought more about it in terms of overall party budget and the food purchased was far less expensive than renting inflatables and/or a party location. (Frankly all of the food fight stuff was even less than a can of silly string for each of the 34 kids).

I apologize for any offense. Thank you for making me think.

Oh JMom.....for someone who labels themselves not crafty....you threw a heck of a great party!!!!....one that your three won't forget....but one that all those school mates won't forget either....very cool idea!!!!

Genius!! I may have to steal this idea. :) Looks like it was a smashing success! Happy birthday to the trio!

Love the ideas you shared - also love the example of grace and selflessness you showed in the comments....a wonderful, godly witness that teaches us a lot. ;)