Erin asked me last week if I had ever blogged the story of our discovery that we were having 3 babies. Her question was timely because today is the 3rd anniversary of that fateful ultrasound.

In the Spring of 2003 I was diagnosed with Polycystic Ovararian Syndrome (PCOS). My body did not ovulate. No eggs=no babies. My husband & I struggled with what it meant to honor God's Will for our family. Did we accept the diagnosis without attempting treatment or utilize healthcare options? My sister-in-law, Amy, shared wise advice that finally brought peace to our decision making process. She challenged me to think of it as I would any other diagnosis involving my health. She asked me to consider if I had an issue with any other bodily system (other than reproductive) would I seek treatment to help my body do what it was designed to do? We talked and prayed and ultimately decided how far we would go with treatment. (I am not going to get into what we decided because it is incredibly personal for each couple and I do not want to sound like I am judging what is appropriate for other couples in this situation.)

November 11, 2003 I took a home pregnancy test. It was negative. November 13, I took another one really just on a whim. I had no symptoms of pregnancy, but we were going out to a nice dinner with colleagues and I wanted to feel OK about having a glass of wine.

Imagine my shock when there was a faint line. My hubby was home, but on the phone with the hospital. I called him to examine the test and we agreed a line is a line, however faint. I had been on some hormone injections, so our excitement was tempered by the fact that it could have been leftover hormones causing a false positive. My hubby called the lab at the hospital and scheduled an appointment for me at 7am the next morning for blood work. When the lab called with the positive results they asked how far along I thought I was. When I told the nurse, she suggested I had miscalculated. I assured her I was positive, as we had used injections on a tight schedule. She then giggled and stated if I was sure about the dates, with numbers this high, there was a strong possibility of two!

We could not get an ultrasound until I was 6 weeks pregnant. This meant a 3.5 week wait to find out if it was one baby or two. Thanksgiving was 2 weeks later, so we decided to wait and make the big pregnancy announcement then. Meanwhile, we tried to keep our cool and scarcely mentioned to others the possibility of twins. As hard as we tried to remain objective, we had become very comfortable, even excited, about having twins.

On December 1st, 2003 we drove to Atlanta for our ultrasound. After parking the car, we paused to pray. I will never forget our specific prayer, "Lord, whether it is one baby or two we are so thankful to have the opportunity to be parents."

The next thing I remember is being in the exam room watching the screen for heartbeats. I saw two and exclaimed, "There are two! I see two. Do you see them?" My husband giggled and grinned as he confirmed there were two. 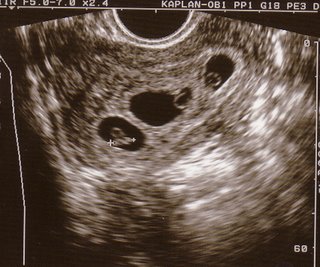 We laughed. We cried. We laughed and cried. We were TOTALLY and completely in shock.

I only really remember the reactions from 2 people that we told: the grandmothers. We called my Mom first and she thought we were kidding. It really took a fair bit of convincing that we were not just teasing her. She even hung up on me during the initial call.

Since we were only about 15 minutes away from my husband's parents' house, we drove straight there. My father-in-law was at work. We called Carol & told her we wanted to show her the first picture of her newest offspring. As we showed her the picture, we pointed out that 3 sacs meant 3 babies. She screamed and squealed and cried and JUMPED up and down for almost a full minute. We finally had to sit her down on the stairs. That moment is a priceless memory!

We repeated the initial conversation, in shock, for a few weeks. We went through the motions, switched into hyperplanning mode and excitedly did what we needed to do. But at night, before we'd fall asleep, we'd often just repeat, "Three babies."

I think the children were almost 2 years old before it sank in.

What a neat story! Thank you for sharing. God is amazing.

I love this! Thanks for sharing the excitement of expecting 3 babies! What a blessing(s) from God!

Chills literally just ran through my body.... I love that story. Must have been pretty surreal.

I can't even imagine the total shock you must have felt. Who knew it would be such fun!

I very vividly remember you telling me your news Jen....I was sitting on the couch in my house when I called you and said "just wanted to check in on you b/c you have been on my brain so much the past week, is everything going o.k? You excitedly said, "Probably because we are pregnant with TRIPLETS" I think my reaction was "SHUT UP"!!! How eloquent of me. This is one of my favorite memories I have of our precious friendship. Love you!!!

Suzanne- Thanks for refreshing my memory. That is exactly what you said. :-)

bloglines has been slacking for me too...it just told me about this post. anyway, i'm so glad to finally hear this part of your story. thanks so much for filling us in! i can't imagine the emotional roller coaster you must have experienced in that ultrasound room!

Incredible!! Thank you so much for posting this sweet story!!

I must be a complete goob, but I cried when I read this--what a precious, fun story!

I could totally feel the excitement and bliss just reading this! What a sweet sweet moment to savor!

I wasn't sure how I missed this post originally until I saw the date and realized you wrote it the day that I had the boys! I too have PCOS. I was shocked to find out we were having twins even though I knew it was a possibility. I can't even imagine how you must've felt to find out about triplets! What an amazing journey you've had!

Wow, this sounds exactly like my very own experience with our first ultrasound. A childhood friend of mine recently sent me the link to your blog since we too have triplets (27 months old, 2 girls and a boy). Your children are so adorable. It was fun looking through your blog. Wishing your family all the best.

wow..God is so gracious! so excited about finding your blog..so encouraged on how the LORD answered your prayers..my husband and I went down that road of Infertility and the LORD blessed us with one..I get so frustrated at times in my parenting, but you have just reminded me of this gift that i have..thank you so much.. would you pray with us that we have more and that we never take these days for granted

I just stumbled across your blog and have been so blessed by reading your amazing story. My hubby and I have been married for 5 years and in the 5 years we have failed to become pregnant. 3 years ago God very clearly told us to adopt and 10 days later we were proud parents of a 2 month old baby boy, we then carried on trying to get pregnant but still no joy in that department. A year after adopting Joseph, God again told us to adopt, 3 days later we were again proud parents of another baby boy, this one was 5 months old. So now we have had our 2nd son for nearly 2 years and I am still not pregnant. We really believe that our next child will be biological and are trusting the Lord to bring this one in His time, the wait is so hard and I often get disheartened thinking that it will never happen.after taking a trip to the doctors we have been told that we are both healthy and there is no reason for us not to concieve, so I guess it it is up to Him!!! reading you story of the triplets has refreshed my hope and trust in God. Thankyou for sharing such an uplifting and encouraging part of your life.
God Bless you and those adorable miracles!

I have been following our blog for over a year now and enjoy reading all about your children, your faith and your lives. I too have been diagnosed with PCOS. We have not been trying that long to get pregnant but pray every day that it is God's will for us to be parents. Thank you for sharing this journey you have been on. It is so helpful to women like myself who have recently been diagnosed and have no idea what is going on. I wanted to comment on a specific post you did recently about conceiving with drugs or leaving it up to God. Like you friend said, if something else was wrong with you would you do everything medically to fix it? Thank you for sharing! God bless!

I was at church this AM and our program handout had a copy of the Halverson Benediction in it. I liked it so much, I came home to google it and there I found your blog (my blessing). Your story is an amazing example of how God works in our lives thru faith in him. Keep blogging....you are passing his blessings on to others who are in need.

the exact thing happened to us and now we have triplet 16 year olds and a 14 year old in birmingham alabama!!