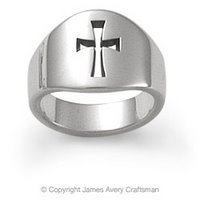 The great thing about writing this in segments, is that I can easily backtrack. Here’s the back story about why/how S. decided to introduce us. S. was very newlywed and new to Atlanta. He was on a rotation with my future hubby at Grady Hospital and noticed his James Avery Ring (a gift from his parents, that he still wears today). Because S. is a man, he noticed my man wore a ring, but not that it was on his RIGHT hand. He was excited about the making a connection with another young Christian resident. So, he invited my future hubby & “his wife” to have dinner with he and D. My man's response was classic: “Wife!? I don’t have time for a wife!” So S. re-issued the invitation to him & his girlfriend. “Girlfriend!? Who has time for a girlfriend?” And the wheels in S.’s head started turning.

We dated across the miles for several months. I was completely head over heels for him from the beginning. He was absolutely the man of my dreams, but he was 100 miles away working obscene hours. He would literally go into work at 5:15am on Monday and not return home until 7pm Tuesday, then go back in at 5:15am Wednesday and work 28 hours straight to Thursday night, then get up Friday morning and start the cycle over. It was clear he cared for me, but while I had a lot of time to pine away for him, he was totally overwhelmed with his surgical training. His life consisted of just trying to eat, sleep, work and see a girl who lived an hour and a half away in his “free time.”

In October 1998, we had been dating 7 months. As a headstrong 24 year old woman with "plans," I felt the need to know if this was going anywhere. Was I wasting my time? I had a dear male friend who was counseling me through the relationship “from a guy’s standpoint.” He encouraged me to let my guy know he should “fish or cut bait.” I drove to Atlanta for a Sunday afternoon “chat” about the future of our relationship. Things went really well. He was able to help me understand just how strung out he was and that he did care for me enjoy our time together. I returned home satisfied only to get a confession from my male friend of his hopes that my guy would "cut bait," so he could pursue me. YIKES!

This was a huge crisis for me. I really questioned if I had just had a blind spot regarding God’s Will. Here I was going to great lengths to make myself available for someone who was too strung out with his responsibilities to commit, while a guy I had never attempted to “impress” was laying his heart on the line. I prayed and journalled for hours that night. When I woke up the next morning, I was on top of my covers with books around me and the lights still on. I still felt so confused. I went to brush my teeth and as I stared in the mirror I felt an overwhelming sense of peace. I felt God tell me, “(Husband's Name) is the one. It is just going to be a while.” It is the only time in my 32 years I feel that I have received an audible message from God. (I am, honestly, a bit embarrassed to put this out there because I know it sounds spooky and overly dramatized to some…but it is my story.) I did not tell my guy about this message until he had proposed a few years later. Talk about freaking a guy out…:-)

A month later,we agreed the long distance thing was a hindrance to our ability to move forward. I sold my house, quit my job and rented a place in Atlanta. Three months after that, we broke up. I was devastated. I had given up a lot to move to Atlanta. I was convinced God had told me he was "the one." I conveniently forgot the second part about "it being a while." My man handled the situation with the utmost honor and integrity. I was hurt. I was sad. I was embarassed I had fallen so hard. I felt duped by God.

It would be just shy of 2 years before we went out again.

Part 3 had better not make me wait till Monday. I feel like I'm right in the middle of a good book.

Am I going to get to read part three before I head to bed?!?

I am planning to work on the next part after I get the kids to bed...but it still may not be the end of the story.:-)

are the kiddos in bed yet

I was blog hopping and have fallen for your family, seriously the sweetest place- thank you for sharing your life! I wanted to leave a quick comment, because I too, only once in my life, heard God, I mean REALLY HEARD him, as if he was holding me, in that brief moment, and whispering into my soul, I had just lost the love of my life in a rock climbing accident (well, six months into it) and was falling apart....and He let me know that everything was going to be okay, and isn't it incredible, that PEACE you feel in that moment, as though He is holding you. We are truly lucky beyond measure to have been touched by God that way.